We are fortunate in Nantwich to have incredibly detailed maps (produced after the cholera outbreak, which killed many of the town’s inhabitants).

On these maps, there is considerable information. Our younger readers may not realise that toilets were not always inside your house! The maps show exactly the facilities at each property:

These facilities were at the back of properties, with no entry access from the street, so the night soil had to be carried through the house!

The term Night Soil was used to describe human excrement which was collected at night from buckets, cesspools, and privies. It was often used as manure, to help grow crops. Have you spotted the old night soil container in Nantwich Museum? A horse (called Toby) was used to help with collections of night soil. There’s a photo here of this activity taking place in Staffordshire.

When Reaseheath College used to grow Sugar Beet, it was grown on some very fertile land at Cobbs Lane (near where the Sacred Orchard now is). So we can guess where some of Nantwich’s Night Soil went…

In William Lee’s Report to the General Board of Health on a preliminary inquiry into the sanitary condition of the township of Nantwich (published in 1850) he makes the following observation on cottages at Wych House Bank (off Welsh Row – near to where the Old Gas Works Car Park now is):

At Wych House Bank, on the borders of the river, there were 20 deaths from cholera within a short period upon this small spot of ground. The late Mr. John Baker was lessee of some of the cottages, and fell a victim. In one of his houses five persons died. There are five tenements without privies.

The ordure is put into tubs, and some of the people have to carry it through their houses once a week or fortnight. Ann Birtles occupies one of the houses, and says:-
“My husband died of cholera, and I was ill. I carry the tub through the house weekly, and make a hole in the yard, and cover it up.”

This outside toilet, at the rear of a property on Welsh Row, has three seats, with a lower seat for a child: 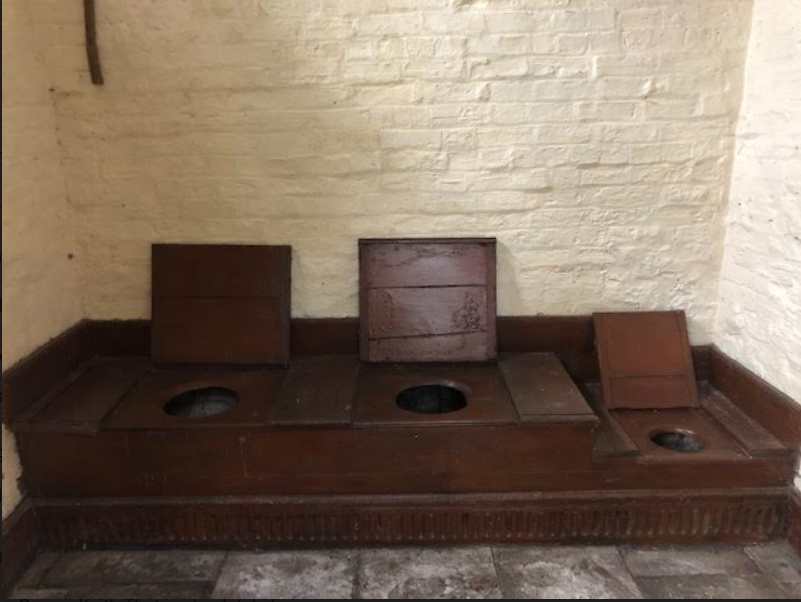 Do you remember having an outside loo, with old newspaper on a hook? Do you remember Izal Medicated Tissue? Did you say “swinging chain means warm seat”?

We would love to hear your memories…