Sweetbriar Hall is a half-timbered “black and white” building on Hospital Street, Nantwich – which managed to survive the great fire of 1583. A plaque on the building: 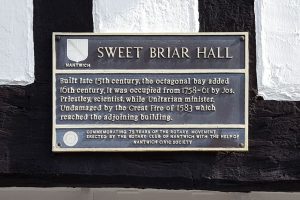 tells us that the building  was occupied from 1758 to 1761 by Joseph Priestley.  However we’ve been unable (so far) to find any account of this.

At the back of Sweetbriar Hall is a red brick building (dating from around 1701) which some think was the school. The building bears his name today: 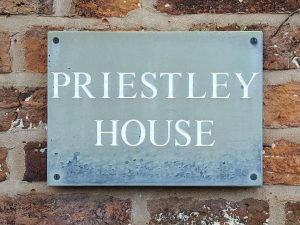 However James Hall tells us that the school house, where Priestley taught, was pulled down around about 1843, and fronted Hospital Street. Hall described the school as a black and white building, and had an upper room that extended over the gate-way that led to the Unitarian Chapel yard.

There’s a nice picture of Sweetbriar Hall in Hall’s History of Nantwich: 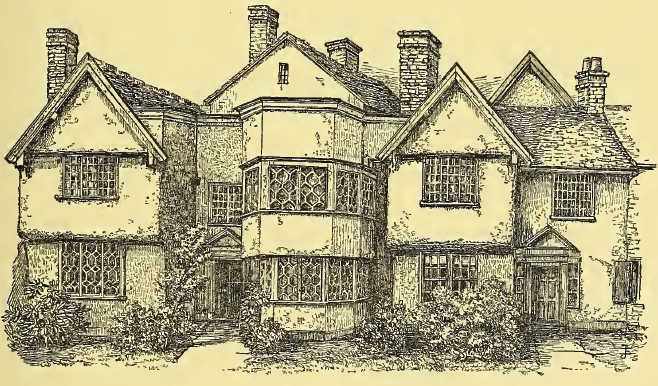 James Hall tells us that Eddowes Bowman in 1814 purchased from the Leversage family of this town the house in Hospital Street, known as Sweet-briar Hall.

William Bowman was born in Sweetbriar Hall, on Hospital Street in Nantwich on 20th July, 1816.  He was the third son of John Eddowes Bowman.

Eddowes Bowman, and his son, John Eddowes Bowman, were partners in a bank that failed in 1816, leaving the family destitute. They left Nantwich in 1816, as a result of the bank’s collapse.

William Bowman later became Sir William Bowman, 1st Baronet. You may be surprised to learn that three different parts of your body are named after him. Read more here.

Part of the building is where Wayside School was. It was established by Miss Dorothy Baker, a daughter of William Baker of Highfields, Audlem, sometime before the Second World War. Miss Baker lived on the premises with her sister, Charity. The school closed in 1972, on the retirement of Miss Baker’s successor, Mrs Doris Johnson. Apparently the cost of “improvements”, made compulsory by new regulations, ruled out continuing the school in the same premises.

Jim Edleston, a local architect, carried out an extensive renovation in the 1950s.