Wrenbury Hall was the home of the Starkey family and was built in the 17th century. It was rebuilt, in stone, after a fire around 1914.

In 1920 Wrenbury Hall, with its Home Farm, outbuildings gardens, etc., and 164 acres of arable and pasture land was purchased for £18,000. The Cheshire branch of the British Red Cross Society presented the County Council with £30,000 to pay for the estate and establish a training colony.

In World War One, the wet muddy and cramped trenches became a breeding ground for tuberculous (TB). In those days, antibiotics were not available and effective treatments for TB were limited. Training colonies helped save the lives of people suffering from TB. Initially they would encourage patients to rest, and later teach them new skills to help them get into employment and try and lead a more normal life.

The Wrenbury Hall Estate operated as a training centre and colony for tuberculous males from Cheshire.  It operated as a small sanatorium of fifty beds catering principally for the many World War I veterans from June 1922 until a much larger sanatorium opened at Loggerheads in Staffordshire opened in November 1923. From then on it the Wrenbury Colony (as it was called at the time) worked closely with the Cheshire Joint Sanatorium (as the Loggerheads sanatorium became known) throughout its working life. Patients from the much larger sanatorium at Loggerheads, would be sent to Wrenbury to convalesce and re-train for their return to normal life. There’s an excellent booklet about the Cheshire Joint Sanatorium here.

In 1938 a Dr. Wilson Memorial Hostel (named in recognition of the services rendered by the late Dr. Charles Wilson to the Colony) was opened. This provides accommodation for 20 colonists and also caretaker’s quarters. After 1948 it became known as Wrenbury Hostel. It came under Cranage Hall from 1951 to 1974. In more recent times it was known as the Charles Wilson Hostel, and is now Wrenbury Nursing Home.

The Brampton Museum and Art Gallery have kindly supplied this image, of TB patients recuperating at Wrenbury, in 1946: 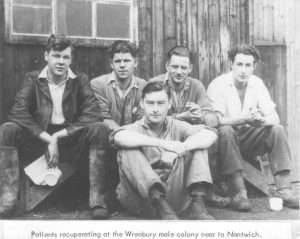 We know that  it is Brian Cooke (with the mug) with Walley Booth on his left, does anyone know the names of the other two – or have pictures of Wrenbury Hall, when it was a hospital?

In 1954 a second hostel opened called the William Gibson Hostel with another 40 beds. This allowed more colonists to be housed. It was named after Alderman William A.Gibson, who for many years was chairman of the Wrenbury Hall Management committee.

The colony became noted throughout the medical world and down the down the years had health visitors from Canada, Australia. New Zealand, China, Japan, South Africa, Spain, Egypt and America, to study its methods.

By 1962, the report from County Medical Officer of Health for Cheshire tells us:

“Wrenbury Hall Industrial Training Colony has continued under full ownership and control of the County Council. One trainee was admitted in 1962 for industrial rehabilitation. At the end of the year there were 20 colonists living in the hostel, and 3 married colonists living with their families in cottages on the estate. Four colonists were living outside the estate. During 1962, 13 colonists and trainees were inspected and treated by County Dental Surgeons”.

In 1962 people with mental health problems were referred to as subnormal! The report tells us:

Since the enquiry by the Royal Commission into the permanent care of subnormals who were unable to care for themselves and who had no relatives willing to undertake this, it has been realised that the real need in this sphere was hostels run by the local authority, and not an extension of the hospital services. In 1962 the first male subnormals were admitted to the county’s William Gibson Hostel at Wrenbury Hall, and by the end of the year there were twenty-one in this hostel.

Every effort is made to place the subnormals in gainful employment around Wrenbury, and approximately 25% of the trainees are so employed. A further 25% are employed in the Wrenbury Industries and the remainder have attended Hanley Adult Training Centre pending the completion of Crewe Adult Training Centre. Every endeavour is made to bring a subnormal to the level at which he can leave the hostel and take up residential work, either on a farm or in a hotel under the supervision of the mental welfare officer. In the year 1962 four left the hostel for residential employment.

“The decline in the use of Wrenbury Hall by tuberculous persons has enabled the whole of the William Gibson Hostel to be occupied by adult mentally subnormal males, so that there are now few vacancies. Some of these men work in local industries and a few in the Wrenbury Hall Industries, but approximately half attend an adult training centre”.

In 1965 it was called Wrenbury Hall Tuberculosis Rehabilitation Centre. The report from County Medical Officer of Health for Cheshire tells us:

Wrenbury Hall Industrial Training Colony has continued under the full ownership and control of the County Council. No trainee was admitted in 1965 for industrial rehabilitation. At the end of the
year there were nine colonists living in the hostel, and two married colonists living with their families in cottages on the estate. Two colonists were living outside the estate.

William Gibson Hostel has forty beds for subnormal males, a third of whom are in gainful employment, the remainder attending an adult training centre. Demand for residential places for subnormals is heavy and, the William Gibson Hostel rarely having vacancies, the extra twenty beds provided by Charles Wilson Hostel were regarded as a useful contribution to the problem of residential care, but unfortunately it has proved very difficult to obtain staff for hostel work, with the result that it has not yet been possible to supplement the 40 beds at the William Gibson Hostel with the 20 at Charles Wilson. Every effort has been made to obtain staff, and sometimes staff have been appointed, only to leave in a few weeks having decided that the work made too great a demand on their time. This staffing problem is a national one, and reflects the general trend of people away from any form of residential work. In order to make Charles Wilson Hostel operative “and the beds are urgently needed” it may be necessary to think in terms of staff living out of the hostel, and coming to work at the hostel for set periods of time.

The site closed around 1980.  The William Gibson Hostel  is now the Wingate Centre, an independent charity devoted to enriching the lives of children and young people with all levels of physical and learning disability, or who are disadvantaged.

Wrenbury Hall is now a wedding venue. A plaque inside the hall commemorates the contributions from hospitals and others towards the establishment and maintenance of the Wrenbury Tuberculosis Training Colony.