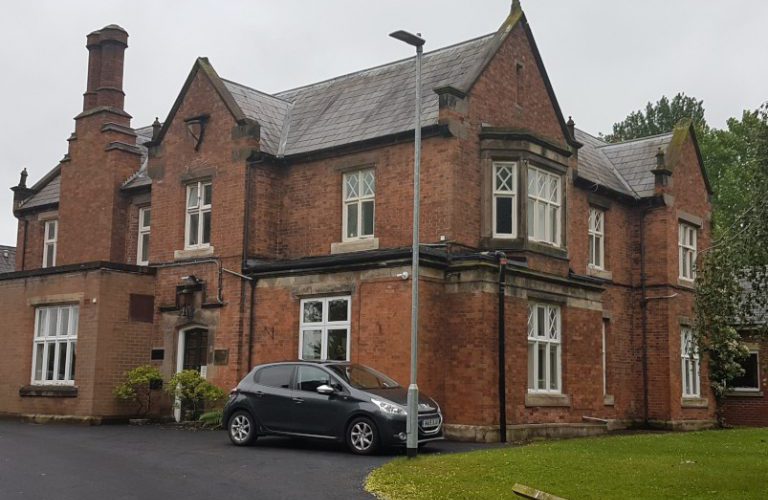 Brookfield House was built in the first half of the 19th century. On the Cheshire Tithe Maps Nantwich architect George Latham is shown as the owner.

In the 1849 Voters Lists, Thomas Deriemer is shown as being at Brookfield House. Thomas was a Nantwich grocer (and agent for the Royal Exchange Assurance company). He was still at Brookfield when he died in 1859.

The house was sold by auction at the Town Hall in Nantwich on the 12 June 1861. Below is an advert for the property:

The House, which is most pleasantly situated on the public road from Nantwich to Shrewsbury, is within half a mile from the Nantwich Railway station, is modern erection of brick and stone, in the Elizabethan style of architecture, built in a most substantial manner, and contains capital entrance hall, dining and drawing-rooms, with a breakfast parlour, very handsome front stairs, with convenient back stairs, china and glass closet, with kitchen and domestic offices, wash-house and laundry; the whole arranged with the utmost regard to convenience; dry cellars for beer and wine, with cool larder and milk house.

The Chamber Floor contains eight bed and dressing-rooms, with a water closet, and two rooms in third story for servants.

The Outbuildings consist of coach-house, two-stall stable, with lofts, a shippon and hay bin for three cows, capital poultry house and piggery, and good office for business, on a second floor, with separate stair to it, which may be used for men servants’ bedroom.

The House is well embellished with entrance gates, shrubberies, and carriage drive, gravel walks, terrace and flower garden, with good kitchen garden, well stocked with fruit trees, and ornamental timber on the land.

The land consists of two fields, adjoining each other, called Near and Further Brookfields, upon the latter of which the house and outbuildings are erected. The two fields are of nearly equal size, each containing about four acres, with extensive frontage to the public road, and will be offered for sale in two lots.

Nantwich draper Samuel Harlock (partner of the Stretch and Harlock store) is living at Brookfield in the 1871, 1881 and 1891 censuses. The 1881 census show Samuel, and his wife Mary living there with three daughters, five sons. There were three servants, a cook, a nurse and a housemaid.

Samuel Harlock was active in the temperance movement in Nantwich. He was a nonconformist, and nonconformist fetes were often held at Brookfield.

Highly important sale the Greater Portion of the Valuable HOUSEHOLD APPOINTMENTS, Glass, China, Plate, and Effects, per instructions from Mrs. Pickmere, who is leaving.

By 1941 Michael Grange Moseley, and his wife Sybil, were living at Brookfield. His father was Oswald Moseley – who was from Agden Hall in Lymm and not to be confused with Sir Oswald Mosley who spelt his surname differently. I’ve heard reports that Sir Oswald Mosley (leader of the British Union of Fascists) was here – but I suspect it was confusion between these two similarly named individuals.

In 1949 the house became the home of Nantwich Urban District Council. The council’s offices had previously been in a tiny office on Love Lane (next door to where the vets currently are).