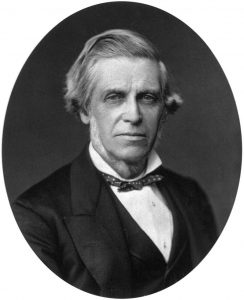 If you’ve not heard of Sir William Bowman, 1st Baronet, you may be surprised to learn that three different parts of your body are named after him!  William Bowman was born in Sweetbriar Hall, on Hospital Street in Nantwich on 20th July, 1816.  He was the third son of John Eddowes Bowman, F.L.S., F.G.S., a Banker in North Wales, and who James Hall tells us was an ardent Naturalist.

John Eddowes Bowman, and his father Eddowes Bowman, were partners in a bank that failed in 1816, leaving the family destitute. They left Nantwich that year, as a result of the bank’s collapse.

William Bowman was educated at Hazelwood School (under the father of Sir Rowland Hill, of Post Office renown), and then spent five years in the Birmingham General Hospital, and entered King’s College, London in 1837.

When he was just 25, he identified what then later became known as the Bowman’s Capsule, a key component of the nephron (in the kidney). Olfactory glands, are also known as Bowman’s glands, and Bowman’s membrane (a membrane in your eye) are also named after him.

In December 1883, Queen Victoria conferred on him the honour of a Baronetcy. He died at Joldwynds, Surrey on 29th March 1892.