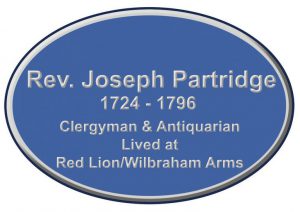 If you ask most people to name a famous Nantwich historian, they’ll probably say James Hall. However a Nantwich clergyman, the Rev. Joseph Partridge (1724 – 25 October 1796), wrote a much earlier history.

Joseph Partridge was born at the Red Lion Inn (now the Wilbraham Arms) on Welsh Row in Nantwich. His father (who was also named Joseph Partridge) was the landlord there. Besides being a landlord, he was also a waggoner, transporting goods to London. When his father died in 1756, Joseph took over this haulage business.

When Joseph Partridge was about 42 years old, he was ordained by the Church of England. He took up the positions of curate at St Michael’s Church, Baddiley, and chaplain of Woodhey Chapel, Faddiley. He held both positions for the rest of his life.

In 1772, Partridge took over as schoolmaster of the Blue Cap Charity School in Nantwich from Joseph Hilditch (who died later that year). The Blue Cap School was amalgamated with Nantwich Grammar School in 1860 and later became Nantwich and Acton Grammar School (or NAGS if you are a dabber).

Partridge’s history of Nantwich, entitled An Historical Account of the Town and Parish of Nantwich, with a Particular Relation of the Remarkable Siege it Sustained in the Grand Rebellion of 1643, was first published anonymously in 1774. 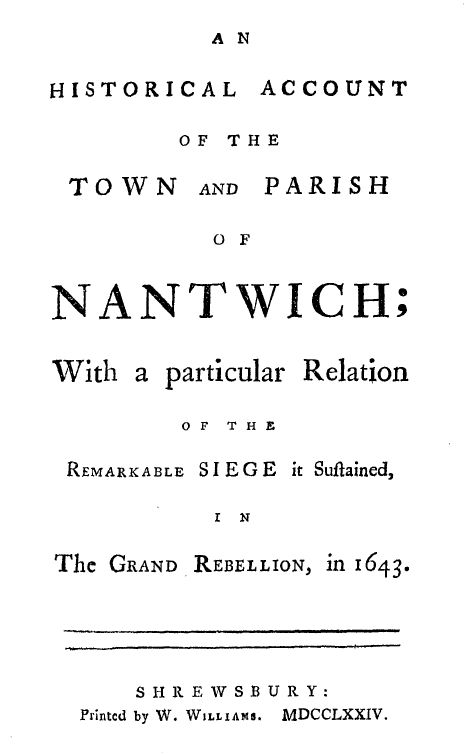 James Hall tells us that Partridge’s history of Nantwich was:

“re-printed, with some omissions, in 1778 in Poole’s so-called History of Cheshire, vol. ii. pp. 573-629. A second history of the town, which was little more than an enlarged and better arranged edition of the former work, was undertaken by Mr. John Weld Platt in 1818, who, however, omits to mention the existence of the earlier history from which he borrowed very freely without acknowledgement”.

Hall J. A History of the Town and Parish of Nantwich, or Wich-Malbank, in the County Palatine of Chester

We’re very lucky to have historians like Joseph Partridge and James Hall, as they help us to know far more about the history of Nantwich.

The Rev Joseph Partridge died on 25 October 1796 and was buried at St Mary’s Church in Nantwich. For more information see here on Wikipedia.