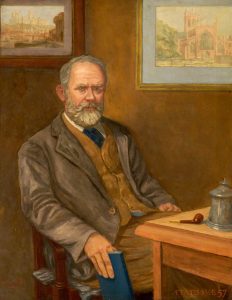 A painting of Nantwich historian James Hall greets visitors as they enter the museum. It hangs in the main gallery. The portrait includes pictures of Lincoln Cathedral and Nantwich Parish Church.

The portrait was painted by James Hall’s son, Walter J. Hall, in 1943 – that was 29 years after his father’s death – and given to the town. It was originally hung in Nantwich Free Library (the building that is now the home of Nantwich Museum) but when the county library service moved to its present building, next to the Civic Hall, the portrait went with them.

Trying to trace the portrait, Nantwich historian John Lake mentioned the painting to a member of the library staff – who recalled that it was under a flight of stairs in the building. There it was rediscovered, with a broken frame and in a dirty condition.

Thanks to Mr Lake, it has now been restored with grants from Cheshire County Council and the North West Museums Service and returned to Nantwich Museum where it has been given a permanent home.

James Hall was born in Lincoln on 20th February, 1846. Hall decided he wanted to become a teacher, and joined the Wesleyan Training College at Westminster in 1864, graduating first in his year in English two years later. He moved to Nantwich and became headmaster at the Wesleyan Methodist Chapel of Nantwich on 7th January 1847, despite the fact he was only 20 years old.

In 1875 he became the first headmaster of Willaston School, which is two miles from Nantwich. Hall became interested in local history, and started work on his history of Nantwich in the mid-1870s. It took nearly a decade to complete, “Hall’s History of Nantwich” was finished in 1883, the 300th anniversary of the Great Fire of 1583 that destroyed much of the town.

In 1885, soon after the publication of Hall’s History, Willaston Board School received an “unsatisfactory” rating in its government inspection. Hall left the school in 1886, but denied he neglected his headmaster’s duties whilst writing his book.

Hall decided to open up his own school, initially on Welsh Row. He had Lindum House built on Wellington Road. At the back of the house was a new schoolroom , which opened in 1887. 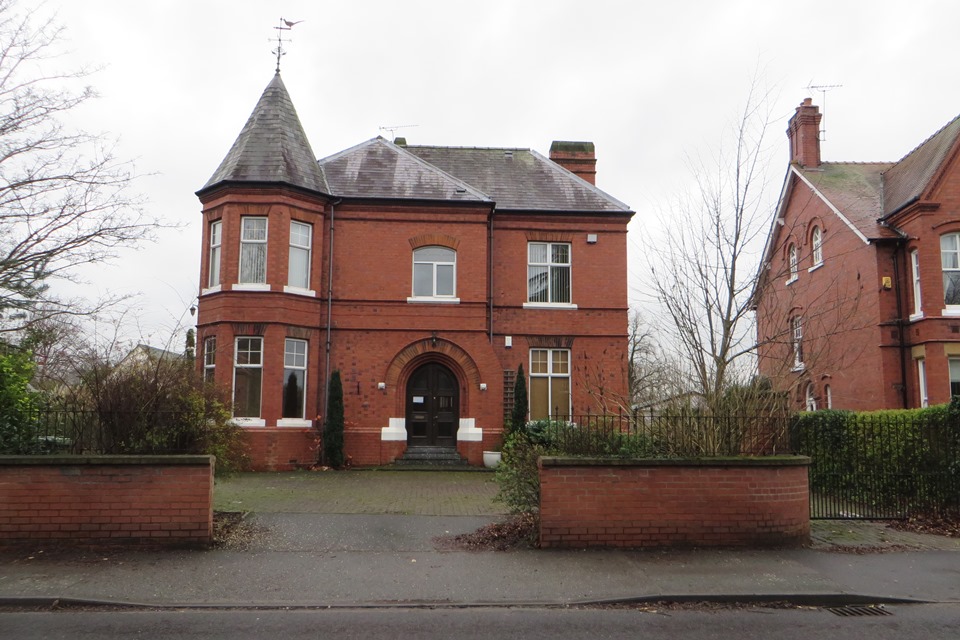 This school was beset with financial problems and closed in 1907. 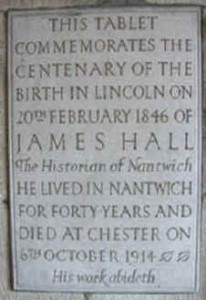 A plaque (right) in the porch of St Mary’s Parish Church, commemorating the centenary of James Hall’s birth, was instigated by local historian, Percy Corry, when he was Church Librarian. He arranged the collection which found the money to erect the plaque.