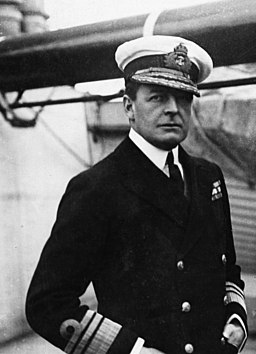 Beatty was the second son in a family of five. Both his parents were from Ireland. His father was Captain David Longfield Beatty and his mother was Katherine (or Katrine) Edith Beatty (née Sadleir). His parents formed a relationship whilst his mother was married to another officer. Beatty’s grandfather arranged for his son to be posted to India in the hope that the scandalous relationship might end. However that didn’t happen and David Richard Beatty’s parents got married after his mum got a divorce (just after he was born).

The family were very keen on hunting and horsemanship, but unlike his brothers (who joined the army) he joined the navy.  He became a captain at the age of 29, which made him the youngest captain in the Royal Navy.

Beatty continued to go quickly up the ranks.  He had a reputation for being brave, and had the admiration of his men. A stoker on one of  his ships said every man on board would die for him at the word.

The Earl Beatty is remembered for his comment during the Battle of Jutland that “There seems to be something wrong with our bloody ships today”, after two of his ships exploded! He later became Commander in Chief of the Grand Fleet, and received the surrender of the German High Seas Fleet at the end of the First World War.

Beatty died on 12th March, 1936. At his funeral his coffin was draped in the Union Flag that was flown by his flagship HMS Queen Elizabeth in 1919.