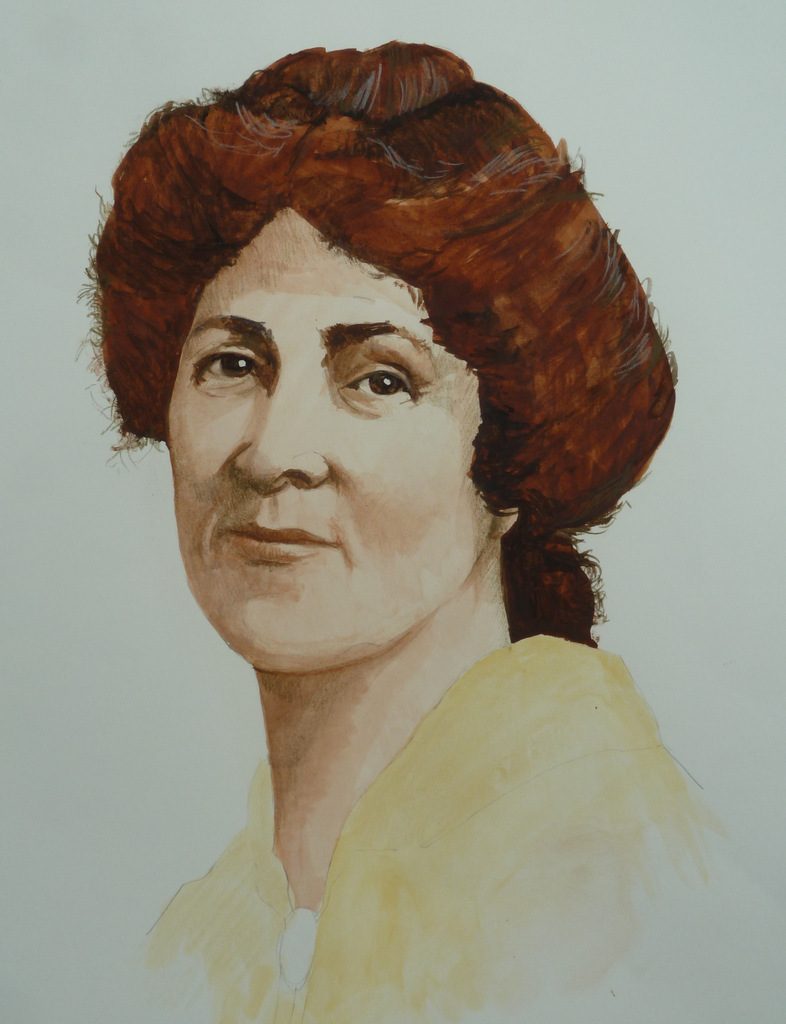 Ada Nield (Chew was her married name) came from a family of Cheshire yeomen. She was born in 1870 at White Hall Farm, Talke o’ the Hill in North Staffordshire. It was a large family (she was the second child in a family of 13) and at the age of eleven she left school when the family moved to Worcestershire.

Around 1887 the family moved to Crewe. Ada worked in a Nantwich shop and, early in the 1890s, went to work at Comptons Clothing Factory on Bridle Road. In 1894 she wrote a series of letters, which were published in the Crewe Chronicle, exposing the exploitative conditions under which the girls and women worked. Her letters were signed anonymously, “A Crewe Factory Girl”. In these letters she complained about charges for workers for their tea breaks and the materials they required to do their work, the unfairness by which work was allocated and the difficulty of earning a living wage. The factory made uniforms for soldiers, police and railway workers. The 400 women in the factory were paid a fraction of what the 100 men were paid, and she noted that some jobs usually done by women were done by men when factory inspectors were present. She complained about the 10 hour working days and argued for a living wage for women rather than a “lingering, dying wage”. The letters to the Crewe Chronicle eventually gained support from men’s trade unions as well as the local MP. As a result of these letters she had to leave Comptons, but working arrangements were improved.

From 1894 to 1897 she became an Urban District Council/Trades Council representative on Nantwich Board of Guardians (administrators of the Poor Law). Their responsibilities included administration of the workhouse, hospital and relief fund. Ada’s initiatives were not met with great enthusiasm. In 1895 she sought to persuade the Board to provide work for the unemployed, but a motion to appoint a committee to address this was lost. A year later she raised five issues to improve conditions in the workhouse. Only one succeeded: that abolishing the rule forbidding conversation between inmates at meal times.
She joined the ILP and, in 1896, travelled widely in their Clarion Van promoting socialism.

In 1897 she married at Nantwich Registry Office George Chew a prominent member of the Independent Labour Party (ILP). A year later their only child, Doris, was born.
In 1905, as an organiser of the Women’s Trade Union League, she formed the Crewe branch of the Amalgamated Society of Tailors.

Ada believed women’s suffrage was an essential preliminary to the industrial and social progress of women. She objected to the Women’s Social and Political Union (WSPU) led by the Pankhursts, which she felt was less relevant to working women and too militant.

Ada was a pacifist during World War 1. She joined various anti-war organisations and refused to contribute to war work. After the war, and the achievement of women’s suffrage in 1918, she withdrew from any major involvement in politics, and concentrated on building up her mail-order drapery business.

You can read the letters that Ada wrote here.

In 2018 Ada was featured at the Museum’s Empowerment of Women exhibition, which is available here.

You can read more about this remarkable woman, in our booklet here.