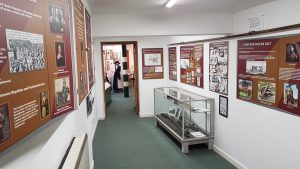 The centre is trying to paint an accurate picture by peeling apart the conventional stories, which were mostly propaganda. The centre has been created with help from the National Civil War Centre, Newark and Grosvenor Museum, Chester as well as The Sealed Knot.

Cheshire cheese is one of the oldest recorded named cheeses in the UK, and has been made for centuries in and around Nantwich because:

The Cheese Room can be found via the short corridor on the left after the main galleries. This is a permanent exhibition featuring the cheesemaking industry of south Cheshire.

The exhibition tells the story of cheesemaking from milk to marketplace and contains artefacts from local cheesemaking farms.  Information panels, illustrated with many photographs, describe how cheese is made and stories about local people and organisations involved with cheesemaking.  Information about cheese and the Nantwich Show and its predecessors is also featured. There is also a section about butter-making just outside the Cheese Room.

The story of cheese is brought to life for younger visitors by a family of cartoon mice who ask questions and talk about the activities involved with cheesemaking.

We are were able to improve our Cheese Room following a grant received from Baker, Wynne and Wilson Community Pledge. 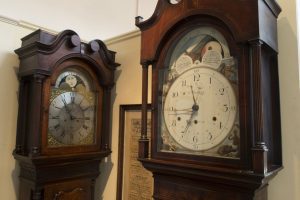 Nantwich has been an important centre for clockmaking, and the museum has catalogued as many Nantwich clocks as possible. Come and see our collection of grandfather clocks, which including clocks by William Masey, Gabriel Smith  and  James Topham. By contrast, also don’t forget to visit Nantwich’s Millennium Clock.  This celebrates the history of Nantwich and is just outside the museum.

Did you know the Romans came to Nantwich?  The Roman settlement in the town was established in the 2nd century AD and existed for about 150 years.

Salt making tools, pottery for serving food and decoration, other tools such as an adze hammer used for working wood, a variety of household goods and even a 2,000 year old loo seat can be seen. Craftsmen and farmers were active in the area and a reaping hook is displayed which would have been used to harvest locally grown cereals and vegetables.

We also have an ancient gold “snake” ring, and information about Roman roads in the area.

Find out how this 700 year old tree was important in salt making!  There’s more about salt making in Nantwich here.

We are fortunate to own many fascinating old pictures, which tell us more about life in Nantwich years ago.  They are on display throughout the museum. We also  have a booklet about Nantwich artists in our shop here. 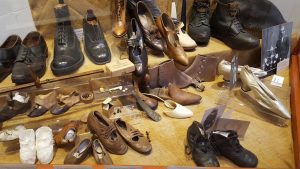 Learn more about the shoe and clothing industries, and why they eventually declined.