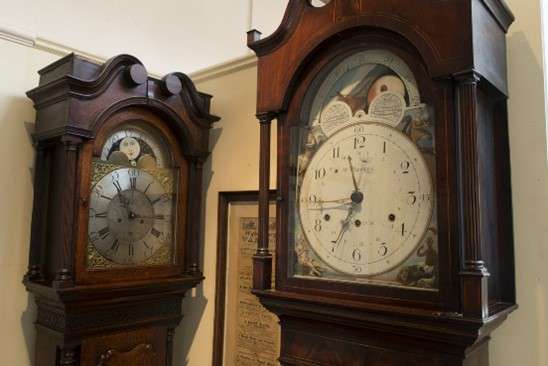 The most important early turret clock makers in the Nantwich area seem to have been Gabriel Smith at Barthomley (and later of Nantwich) and Thomas Swinnerton at Newcastle-under-Lyme. Both men made lantern clocks, the earliest type of domestic clock made and used in the provinces, and longcase clocks.

There are very few items of known Nantwich provenance made over 200 or 300 years ago which still survive to the present day. The best of these are undoubtedly Nantwich clocks, of which there are many fine examples. It is a tribute to the skill and craftsmanship of the Nantwich makers that so many have survived in good working order to the present day, and the pleasure from owning such a remarkable piece of local workmanship is immeasurable.    This section deals primarily with the 8day longcase clock, but there may be occasional references to other types of clock, such as lantern and bracket clocks.  It is interesting to note that no two clocks are the same and even those produced by the same maker show a remarkable diversity.

At the present time there is just one publication referring to Nantwich clockmakers and that is a catalogue written by Alan Treherne for Nantwich Museum and produced for an exhibition of Nantwich clocks in the mid 1980s at the Museum. In this catalogue he lists over 100 clock and watchmakers and journeymen who were involved in making and retailing in the town. In 2001, a survey was undertaken to catalogue more fully, the number of known Nantwich clocks. Photographs were taken of the clock with a close-up of the dial features wherever possible. Virtually all of the clocks were photographed in situ in people’s homes and without the benefit of a photographic studio, the resulting pictures were not always as good as one would have liked. Nevertheless, a total of over 120 clocks were catalogued and a further exhibition of clocks with the catalogues was held at the Museum that same year. This page includes the main clockmakers from this survey. 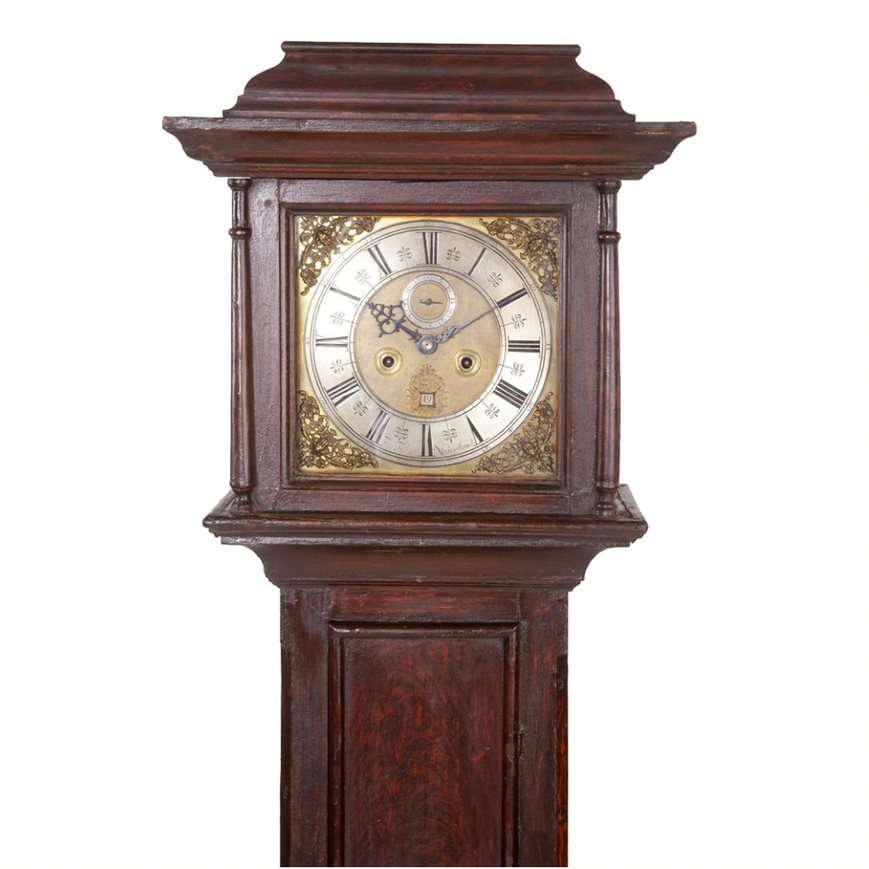 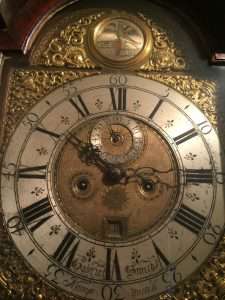 The most well-known of all local clockmakers, he started making clocks in his native village of Barthomley before moving to Nantwich in 1722. He was not only a clockmaker of high quality clocks but also described as a bellfounder, carpenter and millwright. He made and repaired several turret clocks for local churches in the surrounding area.  Gabriel Smith also made lantern, bracket, and 30 hour clocks. A feature of his work is that the movement pillars are screwed into the backplate instead of being riveted as is the normal practice.

Some fine examples of Gabriel’s work can be seen in his clocks featured in Nantwich Museum. His work can be easily identified with unique engraving of a sunburst above the square date aperture and a wheatear decoration around the ringed winding holes, around the edges of the square dial and inside the chapter ring. The florid signature of Gabriel Smith Namptwich can be clearly picked out at the base of the chapter ring. Gabriel was succeeded by his son Joseph who moved to Gloverstone, Chester at the same time that his father came to Nantwich in 1725. Joseph made some fine clocks in Chester following his father’s example. Joseph, in turn was succeeded by his son Gabriel was also a clock and watchmaker. He became an Alderman and Mayor of Chester in 1780/1. 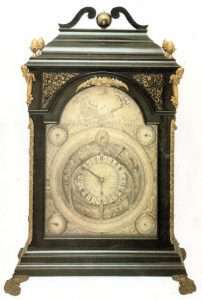 Two quite remarkable important astronomical clocks engraved John Naylor, London and Ios. (Johannes) Naylor Near Namptwych in Cheshire were produced by this maker. A detailed explanation of the working of one of these and a picture on the front cover is given in Treherne. 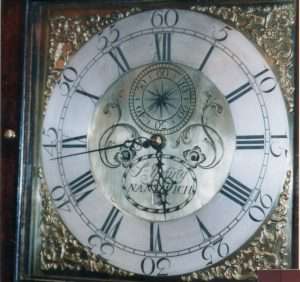 Four longcase clocks were catalogued by this maker, one of which had an unusually shaped arched hood. He appears not to have spent all his time in Nantwich as he is recorded as living at Bunbury in 1711 and 1749 and at Baddiley in 1722. A bracket clock has also been recorded. 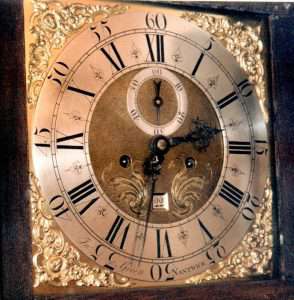 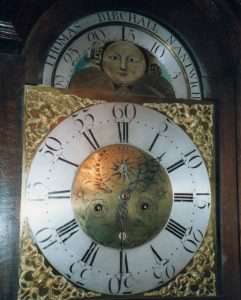 Thomas Birchall was another maker of high quality clocks and worked in Hospital Street, Nantwich, for over 50 years. He produced many fine examples of varying design, of which eleven have been catalogued. While the majority of his clocks were of the brass dial type, two with a painted dial have also been recorded. 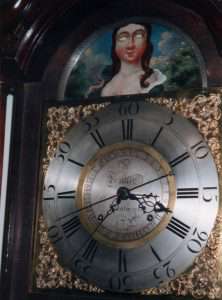 Only one clock by Abraham Butler has been catalogued but this one is quite exceptional. It has a 13inch brass dial with an engraved centre with ornate signature. There is a month pointer and a seconds sweep hand. In the painted arch is the face of a young lady whose eyes move side to side as the pendulum swings. The case is tall and of flame mahogany.

There are 8 clocks catalogued by this maker, of which 2 had brass faced dials. He is listed as living and working in Pepper Street, but it could possibly have been in Churchyardside. He produced a good variety of attractive clocks. 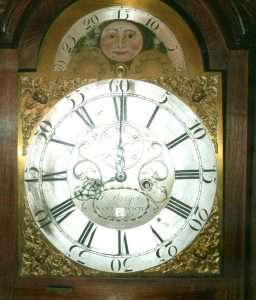 John Stanyer was the most prolific of Nantwich makers. However, it should be stressed that some of the later clocks could have been produced by John Stanyer junior, his son. It is impossible to distinguish one from the other, and as the clocks come from the same stable it doesn’t really matter. John Stanyer worked in High Street, Nantwich not far from the town bridge, and like the other Nantwich makers, produced clocks of high quality, one of which can be seen in Nantwich Museum. 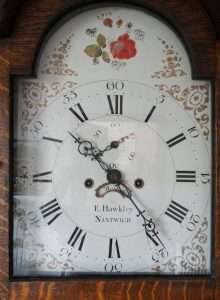 Two clocks by Enoch Hawksey were catalogued, the one with a brass face having an unusual centrally-mounted month date pointer and the days of the month engraved on the inside of the chapter ring. There is also a Halliwell dial with the maker’s signature in the arch. He is known to have to have had a shop in High Town Nantwich and it is thought to have been at 45 High Street, which was recently occupied by Bridgfords, the estate agents. 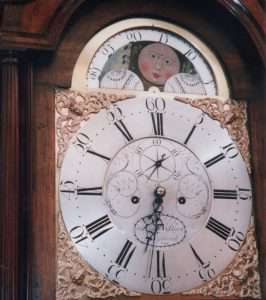 One clock produced by each individual maker has been catalogued but it appears that some time later, the two makers combined and produced clocks on which both names were engraved (it is not common to have 2 makers names on a clock face.) The other intriguing fact regarding these clocks is that some were individually numbered. The three clocks bearing a number were nos. 609, 633 and 642. Could they have made this number of clocks? It would be possible but maybe not probable. The makers are known to have had a workshop on Wych House Bank, close to the town bridge on the Welsh Row side. 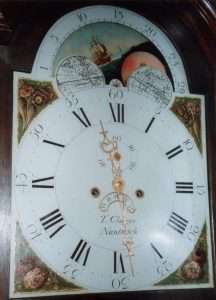 Two arched painted dial clocks were catalogued. He is known to have worked in Hospital Street, it is thought to be around No.27 Hospital Street in close proximity to the premises of Thomas Birchall. 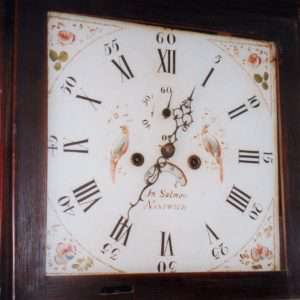 Four clocks were catalogued by John Salmon, all with painted dials and three with an arched dial. Signatures were either Salmon, Jn Salmon or Jno. Salmon. It is known that John Salmon succeeded Enoch Hawksey using the same premises in High Town Nantwich. 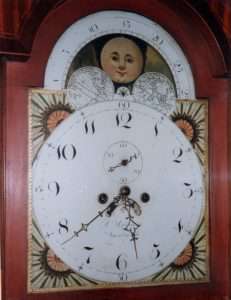 Two clocks by Joseph Symcock were catalogued. There is some slight variation in the spelling of the surname. One of the clocks shows the hours in curved Arabic numerals, popular for a short period between 1810-1830. 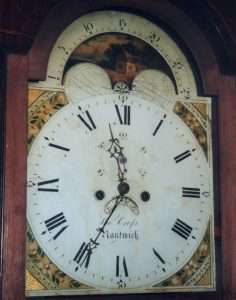 Four clocks by Thomas Cross were catalogued, with one example showing Arabic numerals at the hour. The signature causes confusion as the first letter s is written in the old-fashioned way and is often mistaken by the laypersons as a letter f. 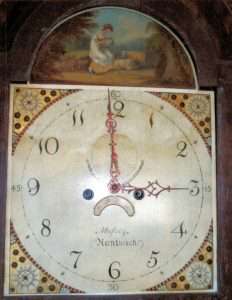 Seven clocks by William Massey were catalogued, with all, apart from one exception, showing Arabic numerals for the hour. Signatures were either Massey, W. Massey or Wm. Massey. He worked in High Street and produced many good clocks. One fine example is in the museum and is unusual in having a centre sweep second hand and a central month pointer. 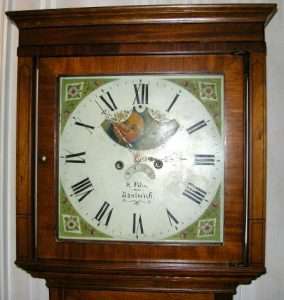 Five clocks by William Palin were catalogued. He worked in High Street. Two examples feature a 12 o’clock moon where the moon is incorporated within the dial and not above in the arch as is normally the case. 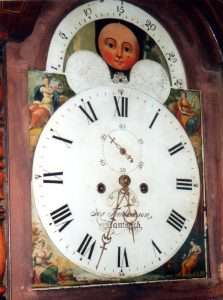 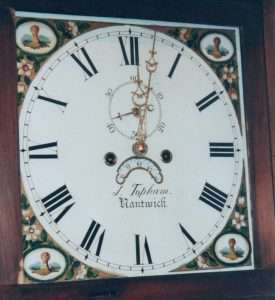 Eight clocks by James Topham were catalogued. He worked in Pillory Street and later in Hospital Street. There is an example of one of his clocks in the museum. 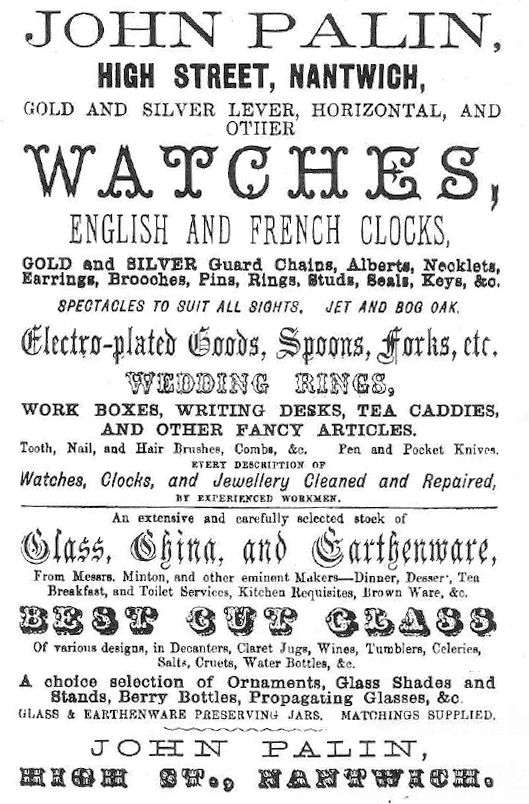 Anne Palin was a retailer of clocks around 1896.

Come and see our collection of grandfather clocks.

By contrast, also don’t forget to visit Nantwich’s Millennium Clock. This celebrates the history of Nantwich and is just outside the museum.